Team wins a car in what is effectively a bet. Team takes said car to Le Mans in defiance of the manufacturer on the losing side of the wager. Team calls up a rookie to fill the final slot in its line-up just days before race week begins. Driver puts in a starring performance that helps the team to victory. Driver goes on to become the greatest in the history of the French enduro.

If you submitted that as the synopsis of a movie script to a Hollywood studio, you’d be told it was beyond the realms of fantasy. But those are the plot lines that underscore Le Mans 1997. The amazing story of that race explains why it stands as my favourite after three decades of reporting from the Circuit de la Sarthe.

Just in case you need me to fill in any of the blanks, the team is Joest Racing and the car is the Porsche WSC95 open-top prototype. And the driver, of course, is Tom Kristensen, who took the vacant berth alongside Michele Alboreto and Stefan Johansson.

The bet was between team owner Reinhold Joest and Porsche research and development boss Horst Marchart. When Joest suggested late the previous year that it might be a good idea to dust off the unraced WSC95s for a crack at Le Mans, the deal they struck allowed him to keep the winning car should his team add a third triumph to its victories in 1984 and ’85.

Joest won the race with Manuel Reuter, Alex Wurz and Davy Jones, got to keep the car and decided to take it back to Le Mans the following year. Porsche wasn’t happy about that. The German manufacturer had an uprated version of the 911 GT1, the so-called Evo, and was pretty keen for that car to win the 24 Hours. 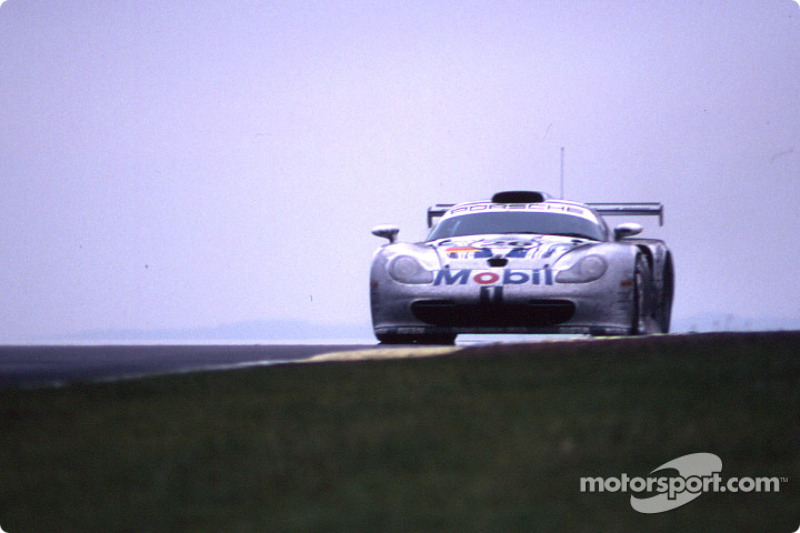 And if that isn’t enough, Joest’s WSC95, chassis #001, didn’t start out as a Porsche at all. It began life as one of the fleet of Jaguar XJR-14 Group C cars, chassis #791 to be correct, with which the British marque claimed Sportscar World Championship honours back in 1991.

The story of Le Mans ’97 really started back in 1994 when the boss of TWR’s North American arm, winner of the Daytona 24 Hours in 1988 and 1990, was given a deadline that summer by Tom Walkinshaw to find a project or close the doors of its Indiana headquarters.

Tony Dowe had set up TWR Inc in double-quick time back in 1988 and now had magic up a programme inside six weeks. The only thing he had in his workshops at the time was a solitary example of the Ross Brawn-designed XJR-14, which had enjoyed a final fling in the IMSA GT Championship in 1992. Dowe mused that if you lopped off the roof, it would fit nicely in the US governing body’s new World Sports Car class.

Dowe had a car mocked up in what he has called “a real smoke and mirrors job”, sent them to Porsche Motorsport North America chief Alwin Springer, telling him he had a car waiting for an engine.

The idea of a Porsche-engined WSC car took hold. The programme was signed off and an attack on the triple crown enduros — Daytona, Le Mans and the Sebring 12 Hours — was planned for 1995. Then a couple of last-minute rule changes in the run-up to the season opener at Daytona threatened to render the car uncompetitive.

Porsche pulled the plug, not only on its Daytona assault, but the entire programme. The WSC95s looked set to spend the rest of their days in the museum as unraced oddities.

But Joest saw the potential of the WSC95. Reinhold happened to be sitting behind Marchart at Porsche’s end-of-season motorsport party in late ’95. He asked if he could rent the two cars for Le Mans, suggesting that he reckoned he could win the race. It was Porsche’s 50th anniversary in 1996, and Marchart went for Joest’s bet-hedging idea to run the two prototypes alongside the new 911 GT1 fielded by the factory. 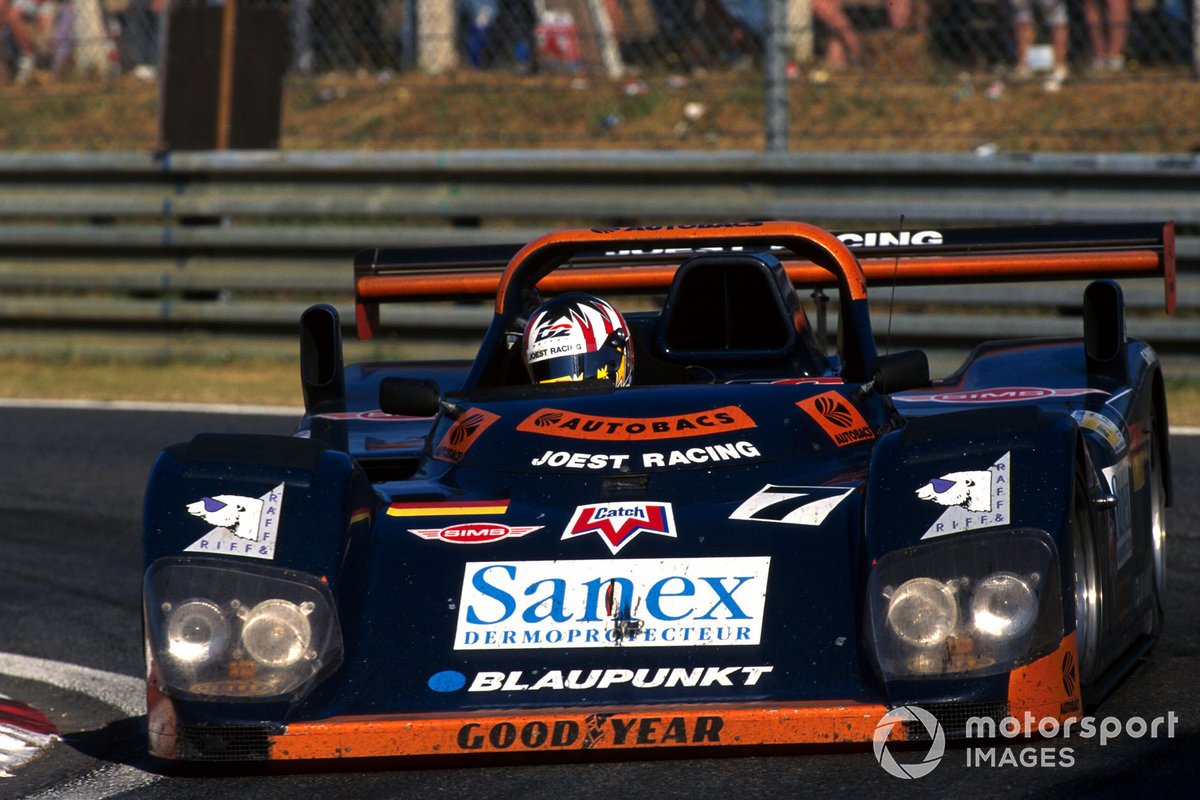 Joest wasn’t flush with spares or money for its one-car Le Mans campaign when it took WSC95-001 back to the Circuit de la Sarthe in ’97. The shortage of cash meant it procrastinated long and hard between taking a paying driver and going for someone worthy of the vacant seat alongside Alboreto and Johansson. It opted for the latter and plumped for Kristensen, who was then rekindling his European career in Formula 3000 after plying his trade in Japan since 1992.

The newbie completed less than 20 laps in practice, partly because he had leave Le Mans during race week to take part in an F3000 test with the Auto Sport Racing squad. Yet he proved his star qualities and affinity for the unique challenge of the Circuit de la Sarthe during the race.

The Dane set a sequence of fastest laps over the course of a triple stint that ended up becoming a quadruple during the night. A legend was born, though no one could have predicted that he would go on to win the race no fewer than nine times.

The victory for Kristensen, Alboreto and Johansson did owe something to good fortune. The best of the Porsche 911 GT1 Evos, shared by Yannick Dalmas, Emmanuel Collard and Ralf Kelleners, was a lap ahead in the penultimate hour when an oil leak resulted in a fire. That allowed WSC95-001 to come through to reprise its ’96 triumph. 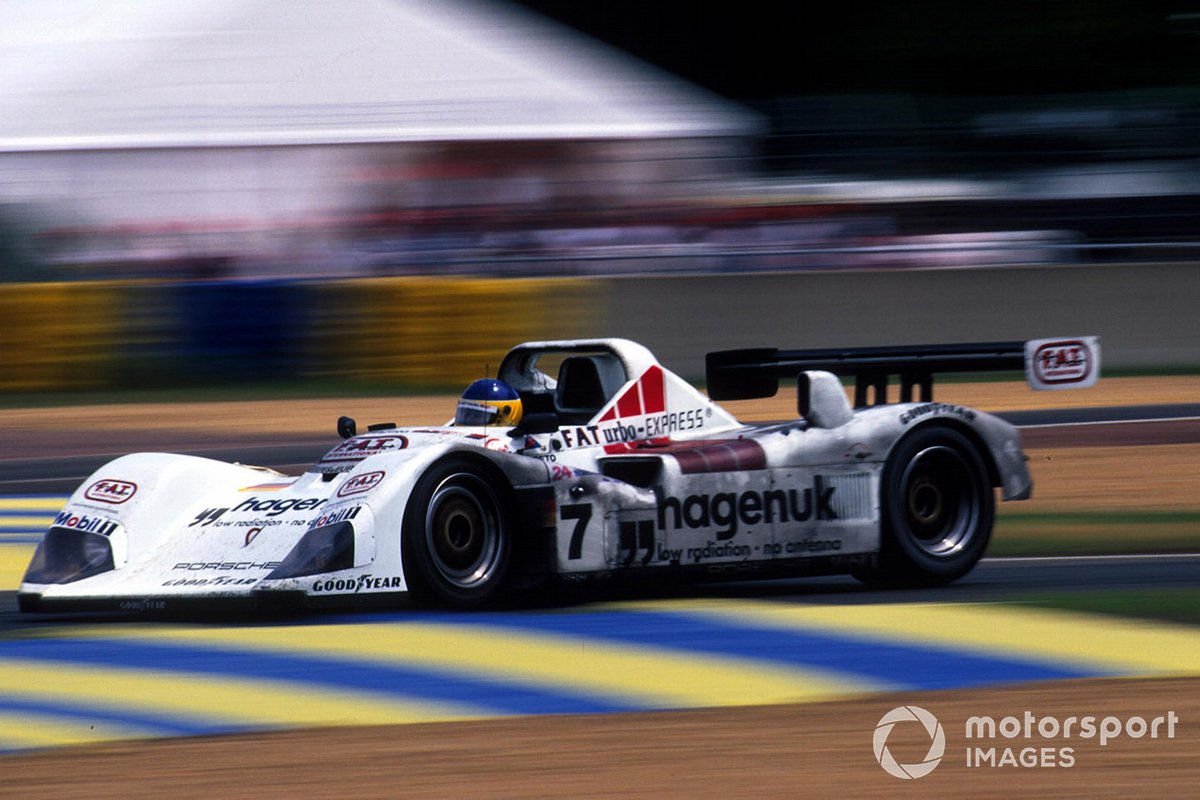 If the amazing story behind Joest’s ’97 triumph wasn’t enough, there are a couple of other, more personal reasons that explain why it is still my favourite Le Mans after nearly a quarter of a century.

I’ll always remember spectating down at Indianapolis when the Joest car with Alboreto at the wheel blitzed through the right-hander and then the left. He was obviously on a flier, which was confirmed when the French announcer screamed something over the PA that even I could comprehend meant the Italian had just plonked it pole.

Better high-tail it back to the pits, I thought, to speak to the man of the moment. When I got there, Alboreto was sitting on a tool chest at the back of the pits all on his own.

Joest was a privateer so there were no PR people to try to exploit the moment. Alboreto was clearly elated with his lap and more than happy to talk to someone who’d actually been out there to witness it. It’s a great memory to have of a much-loved driver, which became all the more poignant after we lost Michele after a testing crash with Audi in 2001.

I also cherish my recollections of Le Mans ’97 because I played a small part in Joest’s victory, or at least I like to think I did. Here’s the story, supported by a little bit of photographic evidence (pictured below), so make up your own mind. 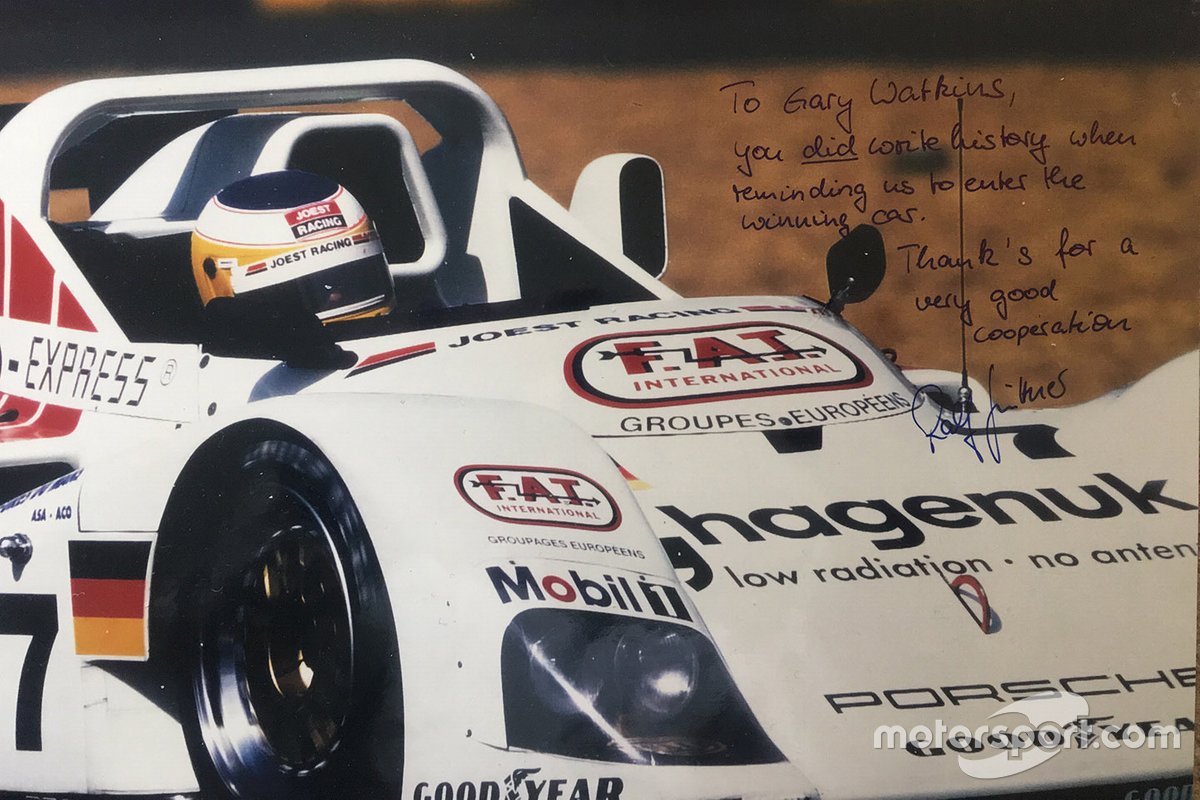 That year was one of the first in which Le Mans organiser the Automobile Club de l’Ouest awarded guaranteed entries, and Joest landed one for its victory the previous year. Only the process wasn’t entirely clear, not to me and certainly not to Joest Racing.

My memory of events differs slightly from that of Ralf Juttner, then Joest’s technical director, but what is clear is that the team initially didn’t go through the regular entry process as required. I mentioned to Juttner in a phone conversation that it was my belief that all the normal paperwork still had to be completed. Whether this came the day after the entry deadline — my recollection — or on the day on which the entry list was published — Ralf’s memory of events — is largely irrelevant.

What followed was a frantic phone call from Joest HQ to Le Mans. There were some within the ACO, I’m told, who didn’t want to let the reigning winners in, but they acceded and the WSC95 made it onto the entry. And a good job it did, because otherwise what to my mind is one of the greatest stories in Le Mans history would never have played out.

I’m not saying the 1997 edition is the best Le Mans on which I have reported in terms of the on-track action, but the backstory to the event 23 years ago make it the most compelling. That’s why, I suspect, it will always be my favourite. 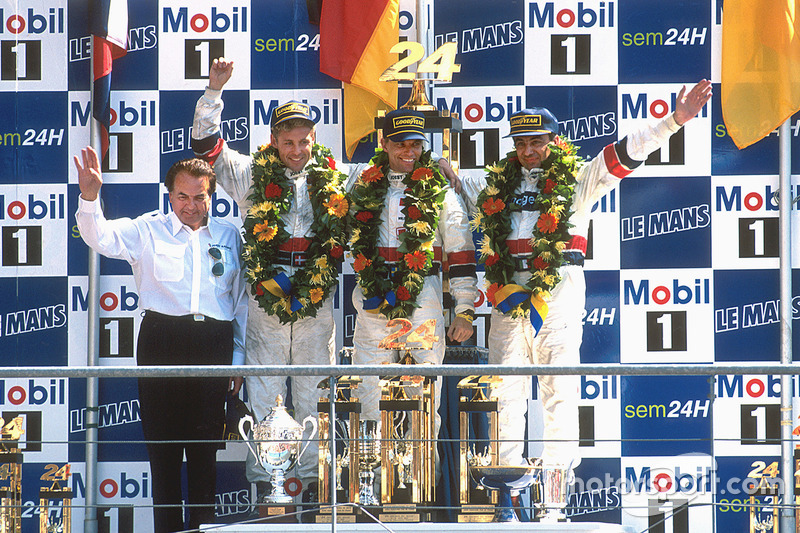 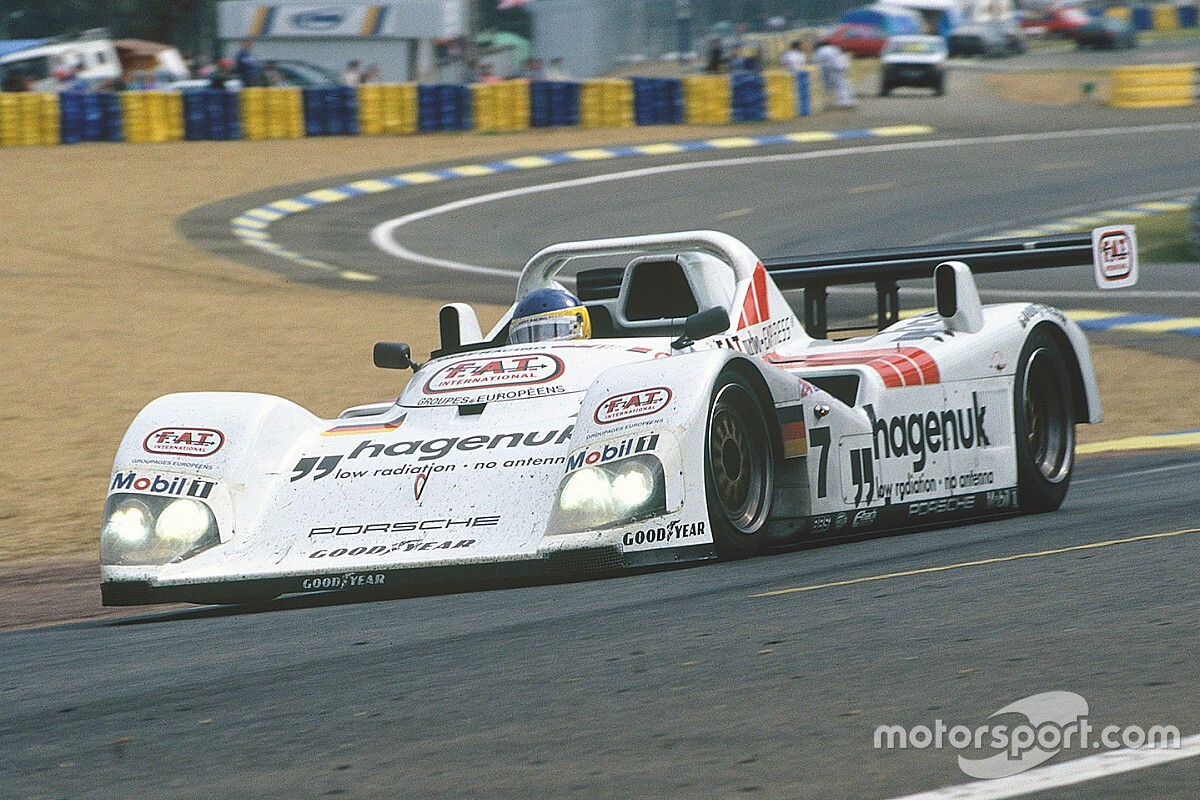 Raikkonen struggling to “keep up” with son in rental karts

Have the “floodgates” now opened for Ryan Blaney?