The ’70s: No Gay People In The Marvel Universe … Except For Hulk’s Would-Be Shower Rapists

Throughout the ’60s and most of the ’70s, there were no gay characters in Marvel comics, unless you count the occasional effeminate villain or “lispy stool pigeon.” And we say “most of the ’70s” because that changed in 1979 with the introduction of the first explicitly homosexual characters in Marvel Comics history. And that honor goes to … two guys who try to rape the Hulk (in his puny Bruce Banner form) in a YMCA shower? 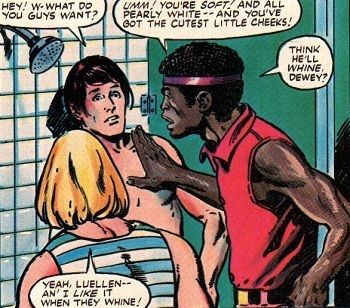 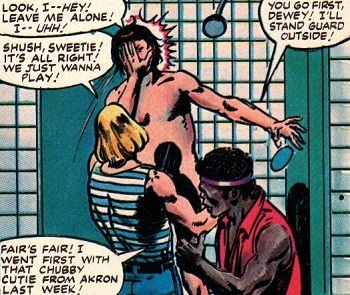 Gay readers, and people with basic humanity in general, weren’t impressed with the fact that Marvel’s first foray into LGBTQ representation consisted of two disco-era rapists called Dewey and Luellen (Dewey and Luellen (c) Walt Disney Company, all rights reserved). When they let Marvel know about this, writer/comic child prodigy Jim Shooter, who also happened to be the company’s Editor-in-Chief, defended the story by saying that he “[couldn’t] understand why any non-rapist would be offended” and pointing out that there were lots of non-sinister gay characters in that very magazine. You just couldn’t tell they were gay. 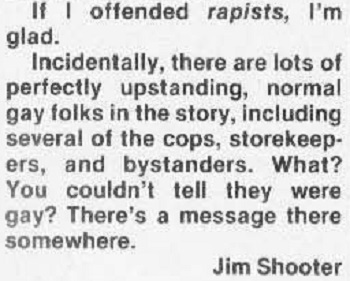 Marvel Comics“We also have lots of non-milky white heroes, they just happen to have invisible powers.”

Shooter apparently liked this “you can’t see the gay people” policy, considering what happened next …

The ’80s: Marvel Bans Gay Characters (But Some Slip Through Anyway)

Multiple comic book writers have stated that Marvel wouldn’t let them introduce any gay characters in the ’80s, possibly because Shooter had ran out of bullshit excuses after the Hulk YMCA controversy. Why go through the trouble of making your gay characters less offensive when it’s easier to ban them? The Comics Code Authority was also a problem, since it forbid “sexual abnormalities” and “sex perversion” and, until 1989, they counted homosexuality as both. Superheroes could exchange fluids with all kinds of bizarre aliens and mutants, but someone of their same gender? Yuck, no. 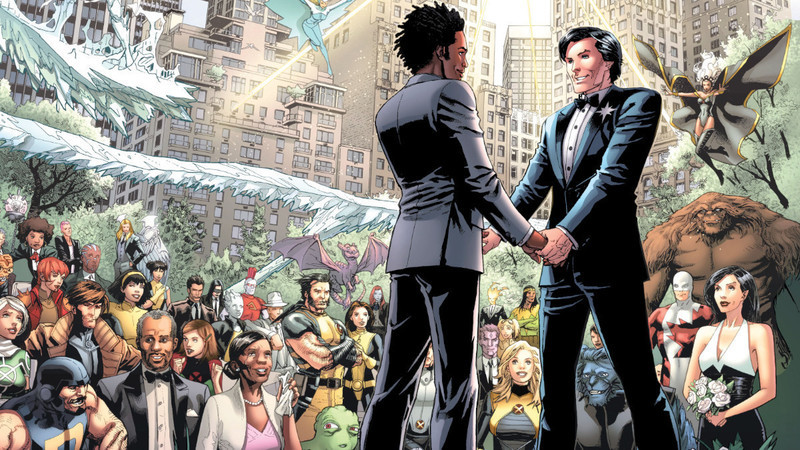