Superman Has Other, Dumber Weaknesses

Superman’s main weakness is so famous that it’s now a synonym for “weakness,” but it’s not the only one. When writers got bored of having him bump into chunks of kryptonite every other issue, they established that he was vulnerable to magic, leaving him at the mercy of formidable enemies like Mr. Mxyzptlk (or however the hell it’s spelled), a magical imp who has somehow never been featured in a live action Superman movie. 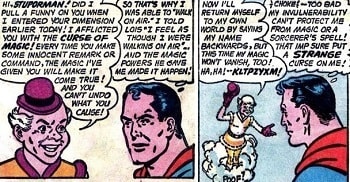 DC ComicsProbably because Brad Pitt’s agenda hasn’t cleared up yet.

When Superman joined the Justice League of America, DC needed a way to write him out of most issues so that Aquaman and Green Arrow would have something to do. Suddenly, that magic vulnerability became a magic weakness, meaning that something as simple as a magical song could have the same effect as kryptonite on him.