Yes, that’s the question we are asking today. Is blockchain technology necessary? The answer is tricky. To arrive at the conclusion takes an unbiased perspective. Bankers and people in the stock market will tell you that it’s the epitome of evil. Blockchain engineers and enthusiasts will tell you it’s the future of the world. The government, as usual, will be indecisive.

Both are overly eager in their opinions, and both are unfortunately wrong. Blockchain is wonderful and revolutionary, no doubt there. But it has some very serious cons that are underplayed by people supporting blockchain. It also has excellent pros underplayed by its critics.

To the enthusiasts, I contextually quote Ian Malcolm from Jurassic Park:

“Your scientists were so preoccupied with whether they could, they didn’t stop to think if they should.”

To the critics, I contextually quote J.P. Getty (a terribly frugal person, in my opinion):

“In times of rapid change, experience could be your worst enemy.”

We’re done with fancy quotes. Time to move on. Coming back to blockchain, the tech was created to make cryptocurrency easier to manage, and it is an excellent technology.

To those who still do not understand what blockchain is, I’ll give you a simple example.

A blockchain is a continuous line of data “blocks.” Think of a single block in blockchain as a digital Lego piece and the organization using it as a kid’s daycare place. The Lego piece is available for use to everyone for whatever they want to create. It is ever-present and ever-useful. It is accessible. The Lego piece can be attached to other Lego pieces to create masterpieces of art.

A blockchain works similarly. Singularly, it’s just some encrypted data. Each data block together can create masterpieces of data available whenever a user wants. Just like Legos, that singular piece is hard to break, overpower or destroy. It’s a pain in the foot. You know, because they destroy you when you step on them. Okay! I’m done with the puns.

They can be extremely useful. Combined with machine learning, blockchain can single-handedly make the entire banking industry obsolete. Blockchain can be used scientifically for complex mathematical calculations and help with complex problems in physics. It can help forward gene therapy. To be honest, blockchain can theoretically go full Star Wars. That brings me to the first con — never go full Star Wars. Didn’t work out well for anyone.

I’ve seen some enthusiasts argue how blockchain is the “epitome of democracy.” It allows everyone access to the same data and it’s fair. To this, I have a single counterpoint: Imagine if Google made their servers public or your 401k balance was made public to the world. How would that affect things? Privacy and secrecy are important things. Most of all, keeping data out of other people’s hands is also necessary.

You may not do much with it, but the greatest threat faced by the modern world is a lack of privacy. It’s already getting to a breaking point. People are long since annoyed by targeted marketing and Cambridge Analytica remains a huge example of how bad things can be. Facebook is almost constantly under fire and Google has followed right behind on a breadcrumb-scattered trail of lawsuits. Blockchain, unregulated, can make humanity’s struggle with deteriorating privacy even worse.

Unregulated blockchain is a nightmarish scenario come true. However, how do you regulate blockchain? How do you put laws in place for a technology whose capabilities we barely understand? By the time we learn of its capabilities, it may be too late to affect change.

Bankers hate blockchain. It’s obvious why they would; the greatest advantage of blockchain is that it cuts down on costs, only requiring infrastructure costs. No transaction fees, no maintenance charges, nothing. Effectively, blockchain makes banking obsolete, and honestly, I feel it should. The banking industry has remained unchanged over millennia. It is an integral part of society whose mismanaged monetary transactions have incited myriad wars.

Unfortunately, the banking industry is in a pathetic state. Bankers have too much power, control and streams of revenue. It needs to topple. It’s a legacy system, and the pain points of this system haven’t changed since the days of Venetian merchants. There is so much abuse of power involved, and the fact that it is legal paints a grim picture.

For example, the man who invented the credit card never wanted interest rates to go over 8%. Today, banks on average charge from 12% to 18% not including transaction, processing and various other fees.

Blockchain can destroy and recreate this system. However, this brings us to the greatest chink in blockchain’s armor: This transformative process is expensive and decentralized. Hate it if you want, but a decentralized system is hard to control. Decentralizing banks means facilitating illegal activities like money laundering, illegal purchases and so on. It is never a good thing.

I have mentioned above that blockchain combined with machine learning is good at analysis. Just two words: Cambridge Analytica.

Blockchain makes it easier for similar stuff to happen. What’s worse is you won’t be able to blame anyone. Blockchain’s data integrity makes it so that everyone is responsible. So, if one part of the network messes up, everyone is compromised.

Similarly, stock market firms are using blockchain for insane investment schemes with unrealistic returns. This can lead to massive stock market crashes and overvaluation of stock to unprecedented levels.

Unlimited access to data can also be a wonderful thing. Imagine that you want to know what your cereal contains. No more secrecy, the answer is right there in your data store. A simple search and you know. Supply chains, fair trade and ethical consumerism are attractive opportunities. Blockchain can create an online utopia if done right. The access to information is an interesting prospect.

For example, imagine an app made with an app builder software backed by blockchain. The blockchain would help make it faster to create apps making the app development process easier for everyone to use. Widgets and plugins would be available in the form of the universally available data blocks. Adapting to new changes becomes easier. This can be similarly applied to any business process. There can potentially be block chains for everything.

Blockchain can make you anonymous. Anonymity is the need of the hour. Imagine voting anonymously, with governments and candidates not knowing who’s voting who. It is a wonderful thing. Similarly, maintaining freedom of the press in sensitive areas becomes easier. Anonymity is what made the internet popular, and it is likely to take it ahead.

So, if you ask again, “Is blockchain necessary?” — the answer is: “Yes. But with certain limitations.”

The coupling of blockchain and machine learning should be restricted. Yes, that limits its usability but sometimes taking a step back is a good thing, especially when it comes to data. After all, we don’t really have a good track record of managing data.

An overhaul in the banking industry and a step toward ethical consumerism are all good things that blockchain brings for us. However, it would be better to take it slow. I do see that the slow and steady way is not happening, as rapid adoption is under progress. Rushing into blockchain doesn’t have a good end.

The views, thoughts and opinions expressed here are the author’s alone and do not necessarily reflect or represent the views and opinions of Cointelegraph.

Abhinav Girdhar is the founder and CEO of Appy Pie. Abs has a cumulative experience of over 10 years in the world of technological development and entrepreneurship. His in-depth knowledge of mobile app development technology and his sharp observations offer valuable contributions to the blog. His areas of expertise are SEO, trends in the mobile app world, and the latest innovations in artificial intelligence and machine learning. He has a passion for fitness and likes to get his daily dose of endorphins from a run and a strenuous session in the gym. 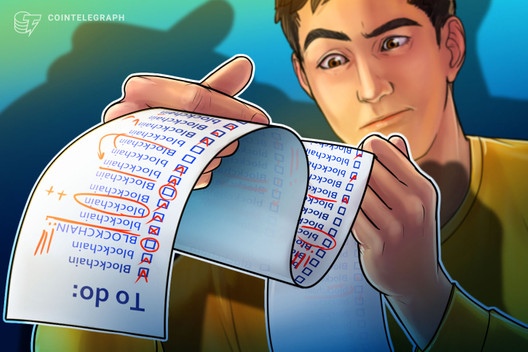 California is one of the most famous places in the world,California is full of experiences with a mix of different cultures..(California)

It is good for a traveler to plan their Italy trip holiday in here,because Italy offers a very diverse culture with such a distant and precious history. One of the most famous things in Italy is its art history and peaceful countryside…(Italy Trip)

The US death toll from the coronavirus pandemic has gone above 5,000, Johns Hopkins University has said.. (US)